The Ministry of Youth and Sports have presented an amount of 10,000 USD to the Ghana Rugby Team for excelling at the 2018 Rugby Africa Bronze Cup competition held at the Nduom Sports Stadium, which is an automatic qualification to the 2019 Rugby Africa Silver Cup.

The amount was handed over when a delegation from the Ghana Rugby Federation (GRF) called on the Deputy Minister for Youth and Sports Hon. Curtis Perry Kwabla Okudzeto.

The purpose of the meeting was to officially present to the Ministry the trophy it won at the competition with participating countries from Lesotho, Rwanda and Mauritius. 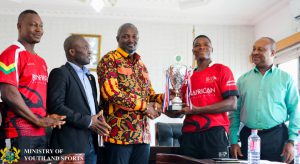 The Hon. Deputy Minister in his brief remarks congratulated the Ghana Rugby Team and the Federation for the successes chalked in the last three years adding that government acknowledges the significance of the discipline, the developments and strides it is making on behalf of the country.

He assured that, Goverment through the National Sports Authority (NSA) will continue to encourage and support recognised sporting Associations and Federations to further delevelop their sports and chalk similar enviable achievement for the country.

The National Tournament Coordinator, Mr. Steve Noi who led the delegation thanked the Sector Ministry on behalf of the team and the Federation for the kind gesture, assuring that the team will work hard to qualify for the Gold Cup tournament later this year.

The Director General of the National Sports Authority (NSA) Prof. Twumasi lauded the Federation for its organizational works specifically an effective database system describing it as worth emulating by the other Federations.