The Japanese Ambassador to Ghana, His Excellency Tsuyormu Himeno has called on the Minister for Youth and Sports, Hon. Isaac Kwame Asiamah to discuss Ghana’s preparedness to compete in the 2020 Olympic Games in Tokyo. 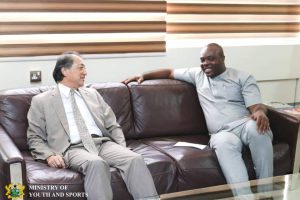 The Ambassador, Mr. Himeno stated that he was excited and looking forward to a great competition by Ghanaian athletes at the Olympic Games.

The Minister, Hon. Isaac Kwame Asiamah in his remarks, expressed Government’s gratitude to the Japanese Government for the tremendous support rendered to the various sporting Federations and Associations in the country.

He added that Government is particularly pleased with the Japanese Embassy for helping secure Team Ghana’s camping base in Tokyo ahead of next year’s Games.

The Minister also made a plea to the Japanese Government to assist in the construction of the Olympic sports complex at Amasaman ahead of the 2023 All Africa Olympic Games to be held in Ghana.

The project, the Minister believes, would provide space for young people to develop their talents when completed.

The President of the Ghana Olympic Committee (GOC), Mr. Ben Nunoo Mensah also expressed gratitude to the Japanese Government for the continuous support to sports especially to the Judo and baseball, noting that a facility for the latter has just been handed over by the Embassy to help in talent development.