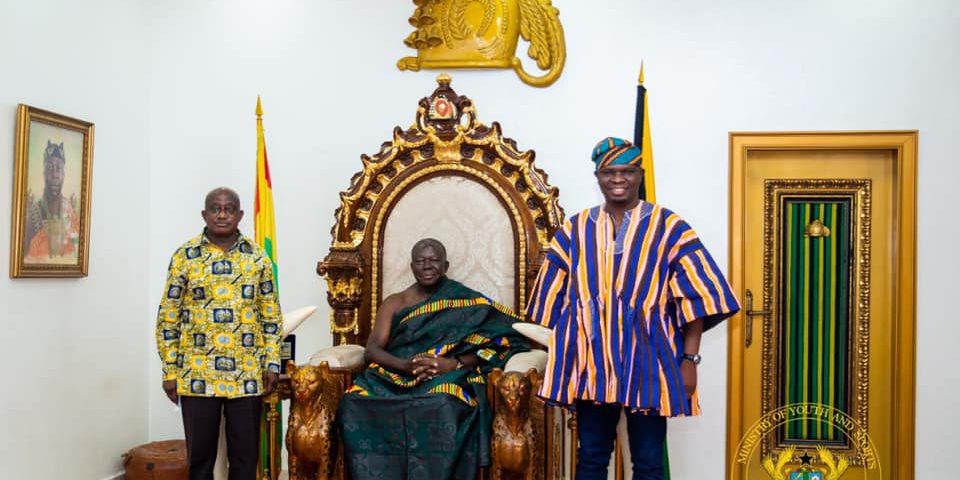 The Minister for youth and sports, Hon Mustapha Ussif on Friday September 17, 2021 paid a courtesy call on his Royal Highness, Otumfuor Osei Tutu II to pay homage to him before his official tour of the Baba Yara sports Stadium.

During the visit, His Royal Majesty Otumfuor Osei Tutu II disclosed that he has been keenly interested in the exploits of the Hon. Minister and has been impressed with his work even when he was at the National Service Secretariat.

The Ashantehene advised the Sports Minister to replicate his strides at the National Service Secretariat which he believes elevated him to his current position.

“I have been following you for years now. Your days at the National Service Scheme and now as sports Minister. The way you transformed your precious office gives me hope about your capabilities. I know you will succeed and make Ghana proud. I am solidly behind you for success” he stated.

Hon Ussif expressed his gratitude to His Majesty for a warm reception and his numerous contribution to sports development and the development of the country at large.

He disclosed to the King his purpose of the visit and sought his blessings and guidance to begin his working tour of the sports infrastructure in the Region particularly the Baba Yara Stadium.

He further gave Otumfuor updates on the renovation at the Stadium and indicated that the facility is ready for use and will soon be handed over to the National Sports Authority.