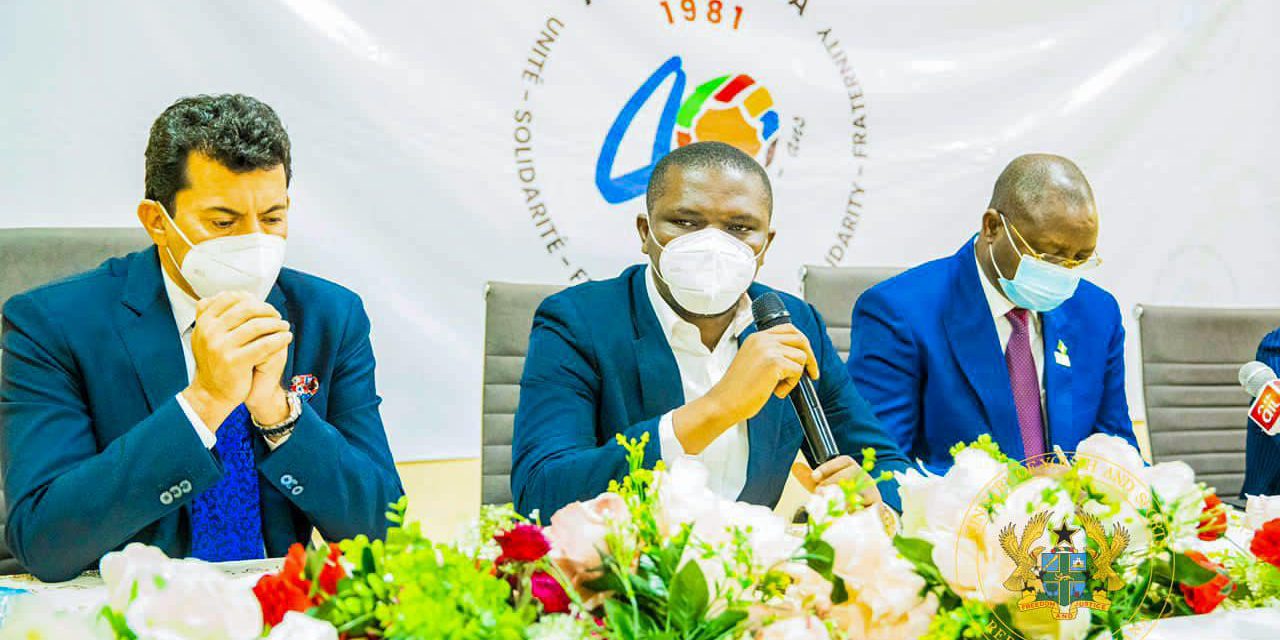 The minister for youth and sports, earlier this week, embarked on an official trip to Abuja to attend the 40th anniversary of the Association of Olympic Committees of Africa (ANOCA) at its headquarters in Abuja.
The minister used the opportunity to update the association on Ghana’s progress on the hosting and organising of the Accra 2023 African Games and also marshal support from International Federations to make the games a success.
He then held a private meeting with the Major General Ahmed Nasser, President of the Association of African Sports Confederations (Union des Confédérations Sportive Africaines UCSA), President of ANOCA, Mustapha Berraf President of ANOCA, Ahmed Hashim, General Secretary of ANOCA, Mr. Ben Nunoo Mensah, President of Ghana Olympic Committee and Kwaku Ofosu-Asare (PhD), Chairman of the Local Organising Committee of the 2023 African Games to discuss issues concerning the Accra 2023 games.
He also held several meetings with colleague youth and sports ministers from Algeria, Nigeria and Egypt to create the needed opportunities for our teeming youth.
For now, a quadripartite agreement was signed among the ministers focused on these 4 key areas:
*Digital Economy
*Digital Skills Training
*Enterprise Development & Entrepreneurship Training
*Youth in Sports
The agreement will see the youth of these countries enjoy exchange programs, capacity building workshops, skills training among others to equip and enhance growth and development in the youth and sports sectors. This they believe will also go a long way to facilitate development through sports.
All parties in the agreement are expected to present 4 people to develop a framework for the implementation.
The Ministers also revealed their intention to rope in all ministers of youth and sports across Africa to toe the same line. This, they believe is necessary because the continent needs a collective and purposive framework for development.
The Minister was also honoured by ANOCA for his dynamism, commitment and dedication to sports and youth development in Ghana and Africa at large.
The President of ANOCA, H. E. Mustapha Berraf indicated the association’s confidence in the minister and his actions and activities so far have proven his zeal towards the development of sports.
Hon. is scheduled to return today, Friday, 1st October to continue with his official duties.
Category: GeneralBy Christian TakyiOctober 1, 2021Leave a comment
Share this post
Share on FacebookShare on Facebook TweetShare on Twitter Share on LinkedInShare on LinkedIn Share on WhatsAppShare on WhatsApp