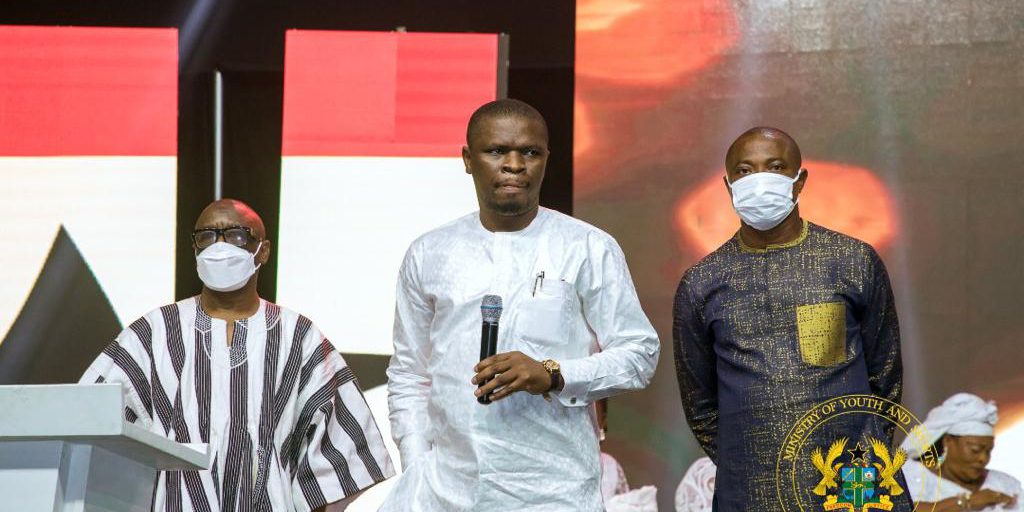 The Ministry of Youth & Sports in collaboration with the Local Organising Committee (LOC) for the 2023 African Games has unveiled the logo, Mascot and official Website to give an identity and brand to the event dubbed, Accra 2023.
In a speech read on behalf of H.E Nana Addo Dankwa Akufo Addo by the youth and sports Minister, Hon Mustapha Ussif stated that the launch of the Logo, Mascot and the Website for the 13th African Games, Accra 2023 was to cement the commitment of his government and the people of Ghana to host and organise the biggest sporting event in Africa come 2023.
He further added that the African games was a tool for social cohesion and youth empowerment.
According to him, the games does not only put happiness and smiles on faces of millions of the citizens but also enhances the culture, peace and friendliness on the continent.
“Such games contribute to the promotion of the Olympic spirit and stand as a major platform for African athletes ” he stated.
He pointed out that the first African Games was birthed in 1965 then called All African Games and was held in Brazzaville, Congo which involved thirty (30) African countries and about two thousand five hundred athletes (2,500) and officials. Ghana participated in the first ever African Games making the nation a founding member of the Games.
” Come 2023, Ghana will be ready to welcome fifty-four (54) African countries, about five thousand ( 5,000) athletes, Two thousand (2,000) accompanying officials, one thousand(1000) international journalists, foreign dignitaries and spectators” he mentioned.
On his part, Minister for Youth and Sports, Hon. Mustapha Ussif, mentioned that H.E Nana Addo Dankwa Akufo Addo directed the Ministry of Youth and Sports in May, 2018 to prepare and bid for the right to host and organise the 13th African Games in 2023.
“subsequently the Ministry of Youth and Sports, constituted a Bid Committee which prepared and submitted a bid to the African Union to declare Ghana’s intention to host and organize the Games in 2023.” he added.
According to him, the launch of the 13th African Games triplets as it is called marks an important milestone in the history of sports in Ghana as it heralds the organisation of the Games for the first time in the country.
He said the ceremony was an indication to the whole world that Ghana is ready, willing and capable of hosting and organizing a benchmarking event which will leave a lasting legacy not only for Ghana but for the continent of Africa.
Hon. Mustapha Ussif further commended the Local Organising Committee (LOC) on this milestone for exhibiting great professionalism in their handling of the preparation of the event so far.
Dr. Kwaku Ofosu Asare, Executive Chairman of the LOC indicated that the logo, mascot and the website for the African Games would attract nearly 5,000 athletes from more than 50 countries and will portray the spirit of the Games.
He said the logo and mascot were a brand and identity of the African Games and by extension the LOC and the African Union.
The logo was designed by one Tracy Ampah Oppong, a twenty- three-year old  product of the Kwame Nkrumah University of Science and Technology ( KNUST) now a Digital Communicator.
He also commended the designers of the logo, mascot and website for having great foresight adding that it was difficult choosing the winners for the competition due to the wealth of talents they exhibited which culminated in the keen contest.

According to him the Local Organising Committe (LOC) would organise Regional and District competitions to identify talents for the games and ensure that Ghana is well represented.