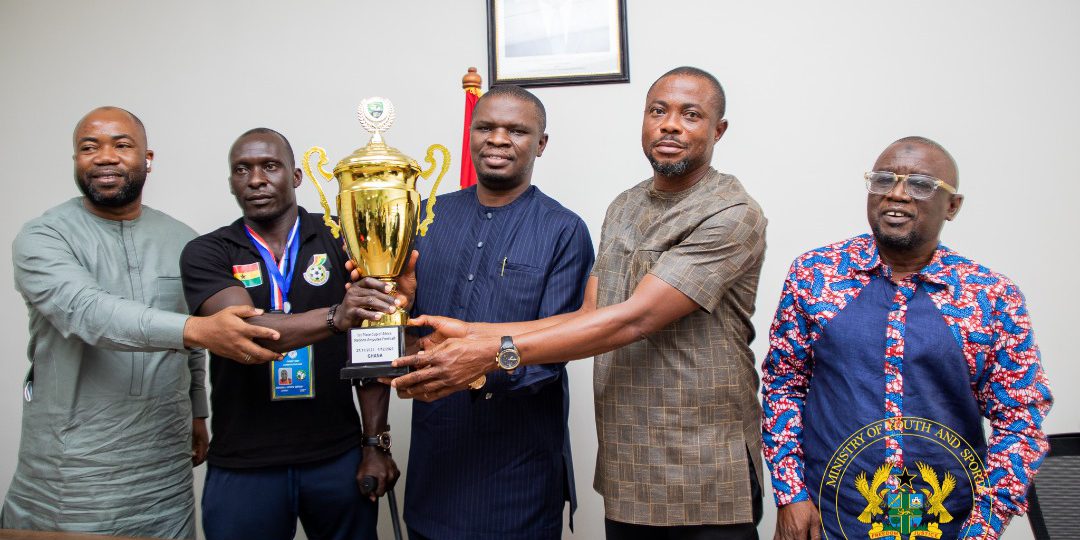 Minister for Youth and Sports,
Hon. Mustapha Ussif was on Tuesday December 14, 2021 presented with a trophy won by the Ghana Amputee Football team after annexing the trophy when they participated in the just ended Cup for African Nations for Amputee Football (CANAF) in Tanzania.
Receiving the trophy on behalf of H.E the President, Nana Addo Dankwa Akufo Addo the Minister announced a $2,000 reward package from H.E to the nine member contingent for their outstanding performance at the competition.
The Hon Minister admonished the team for refusing to inform the Ministry of their participation in the Championship adding that the standard procedure was to write to the Ministry for the necessary support which they failed to do but was quick to accept thier apologies saying “you did not come back empty handed”.
The Hon minister promised that the Ministry will offer the needed support and assistance to the team in thier quest to represent Ghana in next year’s Amputee World cup slated for Turkey.
He called on the team to as a matter of urgency forge ahead in unity in order to attract the needed attention and support from government going forward.
The President of the Ghana Paralympic Committee who doubles as the President of the African Paralympic Committee, Mr. Samson  Deen on his part and on behalf of the team expressed their sincere apologies to the President of the Republic and the Minister for Youth and Sports for disregarding due process adding that it was a mistake that will never happen again.
He expressed his joy about the fact that the team was committed to the reconciliation and building process and was ready to bury their differences.
He revealed  that because the team had won the trophy the court will from 25th-27th January, 2022 sit on their long standing case to bring finality to their litigation.

The captain of the team, Richard Arthur Opentil expressed his gratitude to the Hon. Minister for accepting their apologies and noted that the reason behind their action was to win the trophy and donate it as a sign of peace to the federation.