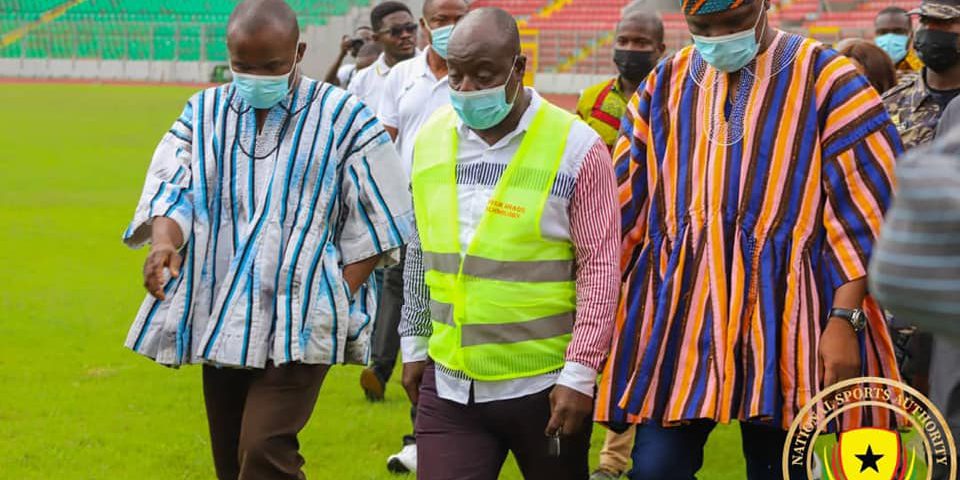 The Youth and Sports Minister, Hon. Mustapha Ussif has revealed, the Baba Yara Sports Stadium in Kumasi is ready to host football games following the near completion of the renovation works taking place at the facility.

This revelation came to light after the sector Minister inspected the progress of the renovation works during his first nationwide tour which commenced in the Ashanti Region on Friday, September 17, 2021 at the stadium which has been closed to sporting activities since February 2020.

Hon. Mustapha Ussif during his tour in the Ashanti Region was in the company of the Ashanti Regional Minister, Hon. Simon Osei – Mensah, Chief Director of the Ministry, Alhaji Hafiz Adam, Director General of the National Sports Authority (NSA), Professor Peter Twumasi and staff of both the MOYS & NSA.

The Minister and his team first went to Manhyia Palace to pay homage to His Royal Majesty, Otumfuor Osei Tutu II to seek for his blessings and support as he begun the inspection tour of the facility to ascertain the progress of works.

The Life Patron of Kumasi Asante Kotoko, Otumfuor Osei Tutu II during the visit encouraged the Sports Minister to work hard and be committed to his job in order to achieve the President’s vision on sports as that will elevate the sports development agenda in the country.

The King of Ahanti also advised Hon. Mustapha Ussif to pay attention to Ghanaian’s maintenance culture and make sure, the stadium is always in good shape. He stressed, headmasters in the various schools should be made to surcharge students who during Inter-School competitions damage the seats at the stadium.

The Sports Minister after his visit to Manhyia finally inspected the Baba Yara Sports Stadium where he confirmed, upon engagement with the consultants and the contractor expressed satisfaction at the extent of the works and was confident that the first phase of the renovation was near completion as such, the facility will be able to host football games.

“Per the briefing I have gotten from my consultant, for football, the facility is ready as we speak.” he stated during his visit of the stadium.

“So CEO of Asante Kotoko and CEO of King Faisal should be rest assured that once we have come and luckily for me they are also here, they have seen things for themselves, the facility, the field is ready.

He noted that, the first phase of the renovation works was 97% complete and the 3% left will not affect the use of the facility adding that the facility will be duly commissioned for the next premier league season.

Hon Mustapha Ussif will in the coming days be paying similar visits to other Regions in the country to inspect other sports infrastructure.

MINISTRY OF YOUTH AND SPORTS CROWNED CHAMPIONS OF THE INTER-MINISTERIAL FOOTBALL TOURNAMENT
July 28, 2022

Minister for Youth and Sports and his Deputy led staff of the Ministry to plant a tree to mark the national tree planting exercise.
June 10, 2022